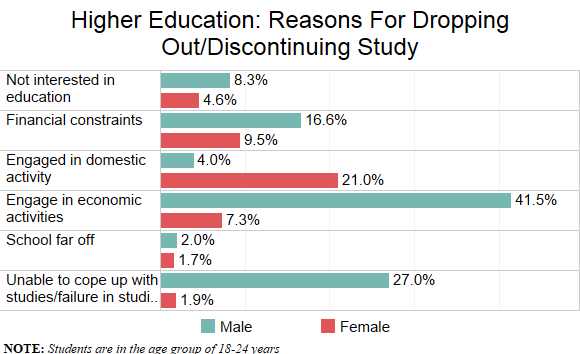 The state of higher education in India can be easily described by the recently–released Quacquarelli Symonds and Times Higher Education rankings of global universities, only three IITs could feature in the top 200 of these lists, and none in the top 100.

What is the structure of higher education in India?

What are the types of Universities?

The university-level institutions in the Indian higher education system are basically of three types:

What are the highlights of the survey?

What are the issues and challenges before higher educational sector in India?

The Standing Committee on Human Resource Development submitted its report on ‘Issues and challenges before higher educational sector in India’ in 2017. The key observations and recommendations of the Committee are as follows:

What are the recommendations?

The recruitment process should start well before a post is vacated.  In addition, to make the profession of teaching more lucrative, faculty should be encouraged to undertake consultancy projects and be provided financial support for start-ups.

Accountability and performance of teachers:

“Doing more with less”, and by involving professionals from research institutes as instructors of UG research, the higher education system will be able to deal with shortage of faculty and reduce their workload.

To maintain the multidisciplinary nature of this programme, UGC’s choice-based credit system needs to be intertwined with the UG research programme, so as to allow mobility of students within disciplines, campuses and external organisations.

Students should be inducted in the first year in ‘professional skills workshops’ that train them in basic skills such as writing research papers and reports, etc.

Bodies like UGC should initiate conferences where UG researchers can present their papers before their peers, so that it becomes a trial ground for them for larger, national or international conferences.

Mentors should also assist students in getting published in existing UG research journals and/or offer them co-authorships.