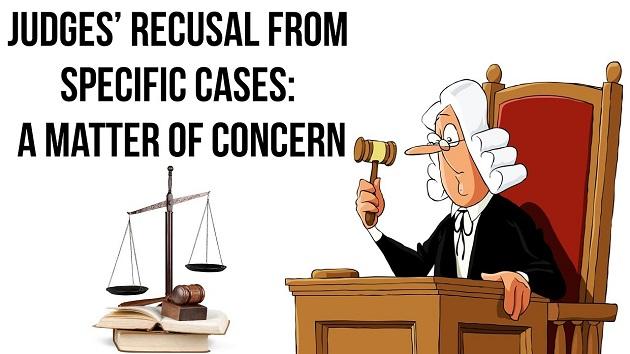 The Constitution Bench of the Supreme Court will decide whether Justice Arun Mishra should be on a bench to decide a matter on which he has given a judgment earlier. The case that Justice Mishra is hearing as part of a five-judge Constitution bench pertains to the land acquisition law.

There have been demands for his recusal as Justice Mishra would be judging his own earlier judgment. But Justice Mishra has defended his right to rule in the matter and called such demands an attempt at “bench hunting”.

What do we understand by ‘RECUSAL’?

What is the background?

There were many cases where possession of land was pending either because the compensation was not given or landowners had refused to sell their land. Many cases were filed in SC. One of them was the Pune Municipal Council case.

How did the issue unfold? 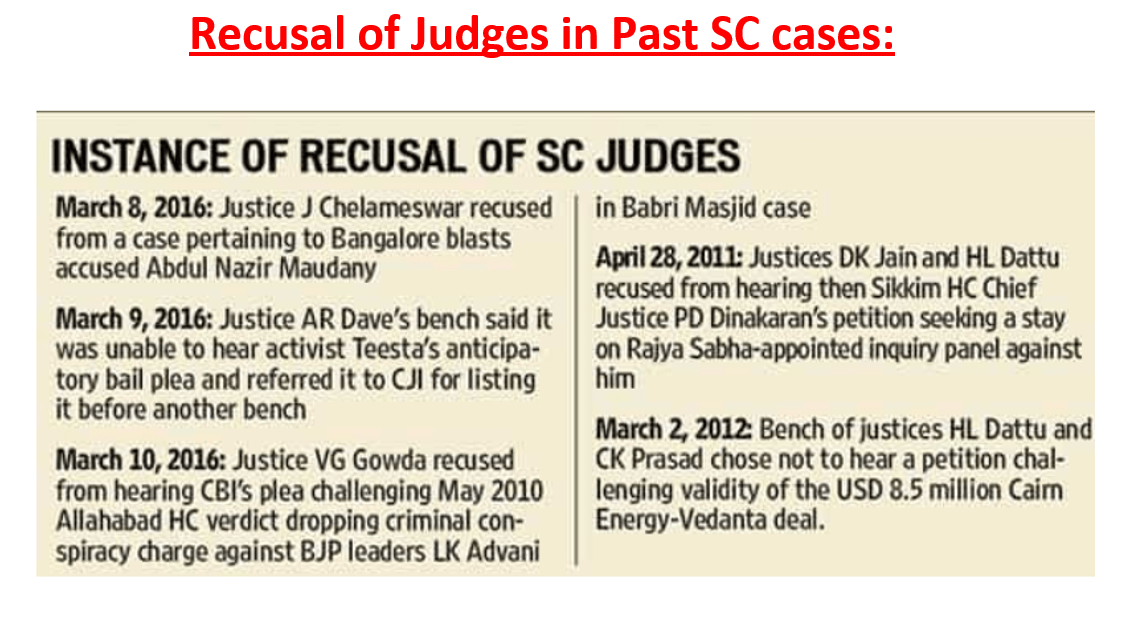 The case was transferred to a Constitution Bench as two Benches of the court had delivered conflicting judgments on the issue.

A three-judge Bench while interpreting Section 24(2), ruled by a 2-1 majority that if a landowner refuses the compensation offered by the developer, he cannot take advantage of his own wrongdoing, and have the acquisition proceedings lapse under the old law. In doing so, the court also invalidated a 2014 judgment by another three-judge Bench on the same issue, and declared it “per incuriam”, means no legal force or validity.

The 2014 verdict by a Bench had said that acquisition proceedings initiated under the 1894 Act would automatically lapse, and would have to be initiated again if the state has not taken control of the land for five years, or if compensation was not paid to displaced farmers. While the 2014 ruling is considered to be in favour of the landowners, the 2018 ruling gave fresh hope for developers.

What led to the larger bench?

A case decided by Benches of larger or equal strength is binding on other Benches, and since the Supreme Court sits in Benches of two or three, this practice ensures consistency and certainty in the law.

A three-judge Bench cannot hold a decision by another three-judge Bench to be per incuriam; it can only ask for the matter to be considered by a larger Bench if it disagrees with the precedent. So this is the allegation on Justice Mishra that he did not follow judicial principles while giving the 2018 verdict.

What are the previous cases of recusal of judges in India?

For a long time, it has been a practice in the Supreme Court that in serious issues like inter-state water disputes , judges from the state concerned do not sit on the bench to decide them. The right to recuse is given to the discretion of the judges.

Ayodhya case: Justice U.U. Lalit recused himself from hearing the dispute over land in Ayodhya after being pointed out that the judge had appeared for former Uttar Pradesh Chief Minister Kalyan Singh in a related contest.

Bhima Koregaon case: The recusal by several Supreme Court judges from hearing the appeal filed by rights activist Gautam Navlakha to quash the FIR against him.

Justice J. Chelameswar in his opinion in Supreme Court Advocates-on-Record Association v. Union of India (2015) attempted to establish a rule. He said that “Where a judge has a pecuniary interest, no further inquiry as to whether there was a ‘real danger’ or ‘reasonable suspicion’ of bias is required to be undertaken. “But in other cases, such an inquiry is required, and the relevant test is the ‘real danger’ test.”

As CJI, Justice Khehar said that the Supreme Court was finalising guidelines that would make it compulsory for judges who recuse in cases to inform the registry in writing and also give reasons for doing so.